A couple of years ago I found a used hard copy of Goldfinger for sale or trade at an event. Although I’m James Bond fan from way back, I confess to never having read any of Fleming’s novels. I ended up trading a copy of one of my novels for Goldfinger and it stayed on my bookshelf until recently.

Goldfinger was the first Bond movie I saw in the early 1960’s at age ten. With five published novels of my own, a background in journalism and having a full time editing business, I tend to read everything with an eye for detail. I really didn’t know what to expect reading Fleming’s work, other than to say my expectations were high and frankly, I was initially a little disappointed.

Looking back on my own freshman writing mistakes, the words ‘had’ and ‘that’ were significantly overused in my first novel released in 2009. The book is being re-edited and will be released in 2014 with ten percent fewer words, especially eliminating had and that as often as possible.

Fleming’s story is great, but the first chapter is littered with those two pesky words. He must have learned something by chapter two because had and that are used significantly less. I won’t infringe on Fleming’s copyright, but I rewrote the first chapter of Goldfinger for my own amusement eliminating had and that as much as possible. Fleming’s word count was 1584. My count is 1571. Not a huge difference, but the chapter does read better.

You may call this little exercise futile or an example of hubris. I’m OK with either. The point is, readers consciously and unconsciously pick up on a lot of things. Eliminating unnecessary words gives them one less excuse to put a book down or write a bad review.

I plan to read and enjoy more of Ian Fleming’s James Bond novels and look forward to the premier of the next 007 film. Pictured left to right are Cubby Broccoli, Sean Connery, Ian Fleming and Harry Saltzman. 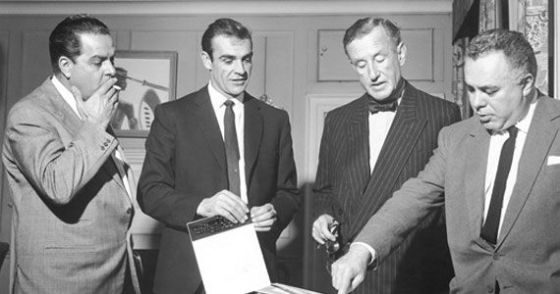